How do Photovoltaics Work？

Photovoltaics is the direct conversion of light into electricity at the atomic level. Some materials exhibit a property known as the photoelectric effect that causes them to absorb photons of light and release electrons. When these free electrons are captured, an electric current results that can be used as electricity.
The photoelectric effect was first noted by a French physicist, Edmund Bequerel, in 1839, who found that certain materials would produce small amounts of electric current when exposed to light. In 1905, Albert Einstein described the nature of light and the photoelectric effect on which photovoltaic technology is based, for which he later won a Nobel prize in physics. The first photovoltaic module was built by Bell Laboratories in 1954. It was billed as a solar battery and was mostly just a curiosity as it was too expensive to gain widespread use. In the 1960s, the space industry began to make the first serious use of the technology to provide power aboard spacecraft. Through the space programs, the technology advanced, its reliability was established, and the cost began to decline. During the energy crisis in the 1970s, photovoltaic technology gained recognition as a source of power for non-space applications.

The diagram above illustrates the operation of a basic photovoltaic cell, also called a solar cell. Solar cells are made of the same kinds of semiconductor materials, such as silicon, used in the microelectronics industry. For solar cells, a thin semiconductor wafer is specially treated to form an electric field, positive on one side and negative on the other. When light energy strikes the solar cell, electrons are knocked loose from the atoms in the semiconductor material. If electrical conductors are attached to the positive and negative sides, forming an electrical circuit, the electrons can be captured in the form of an electric current -- that is, electricity. This electricity can then be used to power a load, such as a light or a tool.
A number of solar cells electrically connected to each other and mounted in a support structure or frame is called a photovoltaic module. Modules are designed to supply electricity at a certain voltage, such as a common 12 volts system. The current produced is directly dependent on how much light strikes the module. 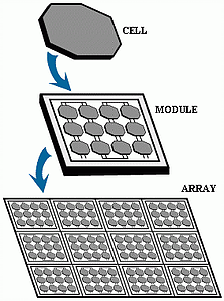 Multiple modules can be wired together to form an array. In general, the larger the area of a module or array, the more electricity that will be produced. Photovoltaic modules and arrays produce direct-current (dc) electricity. They can be connected in both series and parallel electrical arrangements to produce any required voltage and current combination. 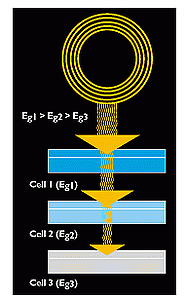 Today's most common PV devices use a single junction, or interface, to create an electric field within a semiconductor such as a PV cell. In a single-junction PV cell, only photons whose energy is equal to or greater than the band gap of the cell material can free an electron for an electric circuit. In other words, the photovoltaic response of single-junction cells is limited to the portion of the sun's spectrum whose energy is above the band gap of the absorbing material, and lower-energy photons are not used.
One way to get around this limitation is to use two (or more) different cells, with more than one band gap and more than one junction, to generate a voltage. These are referred to as "multijunction" cells (also called "cascade" or "tandem" cells). Multijunction devices can achieve a higher total conversion efficiency because they can convert more of the energy spectrum of light to electricity.
As shown below, a multijunction device is a stack of individual single-junction cells in descending order of band gap (Eg). The top cell captures the high-energy photons and passes the rest of the photons on to be absorbed by lower-band-gap cells.
Much of today's research in multijunction cells focuses on gallium arsenide as one (or all) of the component cells. Such cells have reached efficiencies of around 35% under concentrated sunlight. Other materials studied for multijunction devices have been amorphous silicon and copper indium diselenide.
About Mysolar
Mysolar is a Mamibot (with its headquarters based in USA) company and sub-brand, a manufacturer and factory specialized in designing and manufacturing solar panels with the most the-state-of-the-art technology and the highest level of craftsmanship.
Mysolar aims to provide tier 1 solar panels and build itself tier 1 solar module manufacturer.
Mysolar has a team of the-most-experienced engineers with more than 15 years in Solar PV manufacturing, the strictest quality control team who averagely worked more than 10 years in Solar Panel production, the most client-oriented and professional sales team who know the art to provide proper solutions and answers to customers and the most dedicated R&D masters who can bring the latest cost-effective and high-efficient solar modules to the market.
Mysolar produces truly wide range of high-level solar panels including standard solar modules with both poly and/or mono cells, super efficient PERC solar panels in both mono and poly crystalline, super cost-effective poly and/or mono solar panels with half cells.
We believe that we are rewriting the history of  energy consumption way and we are doing more to build a cleaner and more comfortable world.
Mysolar is a Mamibot company and brand of solar power products including solar modules/panels, solar inverters, residential solar system and commercial solar power plants. It aims to build Mysolar as tier 1 brand solar panel manufacturer worldwide. Solar panel manufacturer, solar module factory|太阳能组件制造商|ソーラーパネルメーカー、ソーラーモジュール工場|Producent paneli słonecznych, fabryka modułów słonecznych|Hersteller von Solarmodulen, Fabrik für Solarmodule|Производитель солнечных панелей, завод солнечных модулей|Fabricant de panneaux solaires, usine de modules solaires|Solpanel producent, solmodul fabrik|태양 전지 패널 제조 업체, 태양 전지 모듈 공장|Výrobce solárních panelů, továrna na solární moduly|Fabrikant van zonnepanelen, fabriek van zonnemodules|Fabricante de painel solar, fábrica de módulos solares|Výrobca solárnych panelov, továreň na solárne moduly|ผู้ผลิตแผงโซลาร์เซลล์, โรงงานโมดูลพลังงานแสงอาทิตย์|Güneş paneli üreticisi, güneş modülü fabrikası|Виробник сонячних панелей, завод сонячних модулів|Κατασκευαστής ηλιακών συλλεκτών, εργοστάσιο ηλιακών μονάδων|Napelem gyártója, napelemmodul gyár|Produttore di pannelli solari, fabbrica di moduli solari|Nhà sản xuất bảng điều khiển năng lượng mặt trời, nhà máy mô-đun năng lượng mặt trời|مصنع الألواح الشمسية ومصنع للطاقة الشمسية|